Why Not For Sale by Owner? 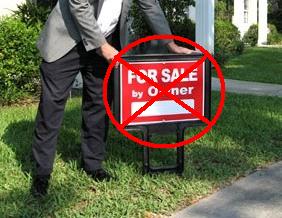 Each year a small army of home sellers throw caution to the wind and “go it alone” – without the assistance of a licensed real estate professional. This ever-decreasing band of risk takers, ventures into the land of pricing, marketing, screening, scheduling, showing and paperwork all with the goal of saving money. It's often an experience they find less than rewarding. The primary reason seller's chose to go the FSBO route - without the assistance of a real estate agent - was because they did not want to pay a fee or commission.  More money would have been left in the sellers pocket given that in 2013 FSBO homes sold an an average of 17% less than agent assisted home sales.

According to the 2013 NAR Profile of Home Buyers and Sellers released by the National Association of REALTORS®, “the level of for-sale-by-owners is on a sustained decline and is now at a record low of 7 percent. This is a clear downtrend in FSBO's since that market share experienced a cyclical peak of 18 percent in 1997. In addition, a growing share of FSBO properties are not placed on the open market - they're private transactions,” (over 33 percent sold to someone they knew before placing it on the open market as a FSBO).

NAR Senior Research Analyst, Anna Barlett, stated in February 12, 2009 “With housing inventory at its highest since the early 1980s, a greater number of home sellers understand the value of professional representation. This is understandable given that the housing market has been challenged in the past two years and inventory of homes for sale reached its highest point since the early 1980s.”  This was certainly true for 2013.

The Process of Selling Your Home

10 Ways to Make Your Home More Appealing to Buyers

The Spirit of Asheville NC